Females vs Males Who Makes the Most Money?

A big motivation for going to college is money.

Put simply, after you graduate, you’re eligible for a whole range of high paying careers like investment banking, management consulting, and engineering. The economic research generally shows that a college degree is a sound investment to boost your future earnings.

But do female and male graduates from America’s top colleges earn about the same money when they graduate? The gender gap in pay, where women earn less than men, has been one of the most persistent inequalities in America after all. Does this start upon graduation and even from the best schools in America?

In this analysis, we looked at Department of Education data from the College Scorecard project, and looked at average earnings for people who had started school six years prior and who were now working and no longer full time in school.

We looked at the average “top” 117 schools, as defined by the US News College rankings (the 100 universities plus the top 25 liberal arts schools, less any schools that didn’t report the data).

Even upon graduation at top schools, there is a resounding gender gap. The average male in our study is earning $59K, while the average female is earning 19% less with a salary of $48K.

In fact, of the 117 universities, only three schools had female graduates that made more than male ones upon graduation (Clark University, Stevens Institute of Technology, and Yale University). For all other schools, female graduates earn less than males, often by a substantial amount.

The school with the largest gender gap in earnings is Brigham Young, where female graduates earn 57% less than male ones do. At other top schools like Princeton, Williams, Stanford and Carnegie Mellon, male graduates earn at least 30% more than female ones on average.

Before diving into the rankings based on gender pay-gaps, let’s look at the overall data on annual salaries. The average annual salary among these graduates is $53K per year. However, when you split the data by gender, a very different picture emerges: 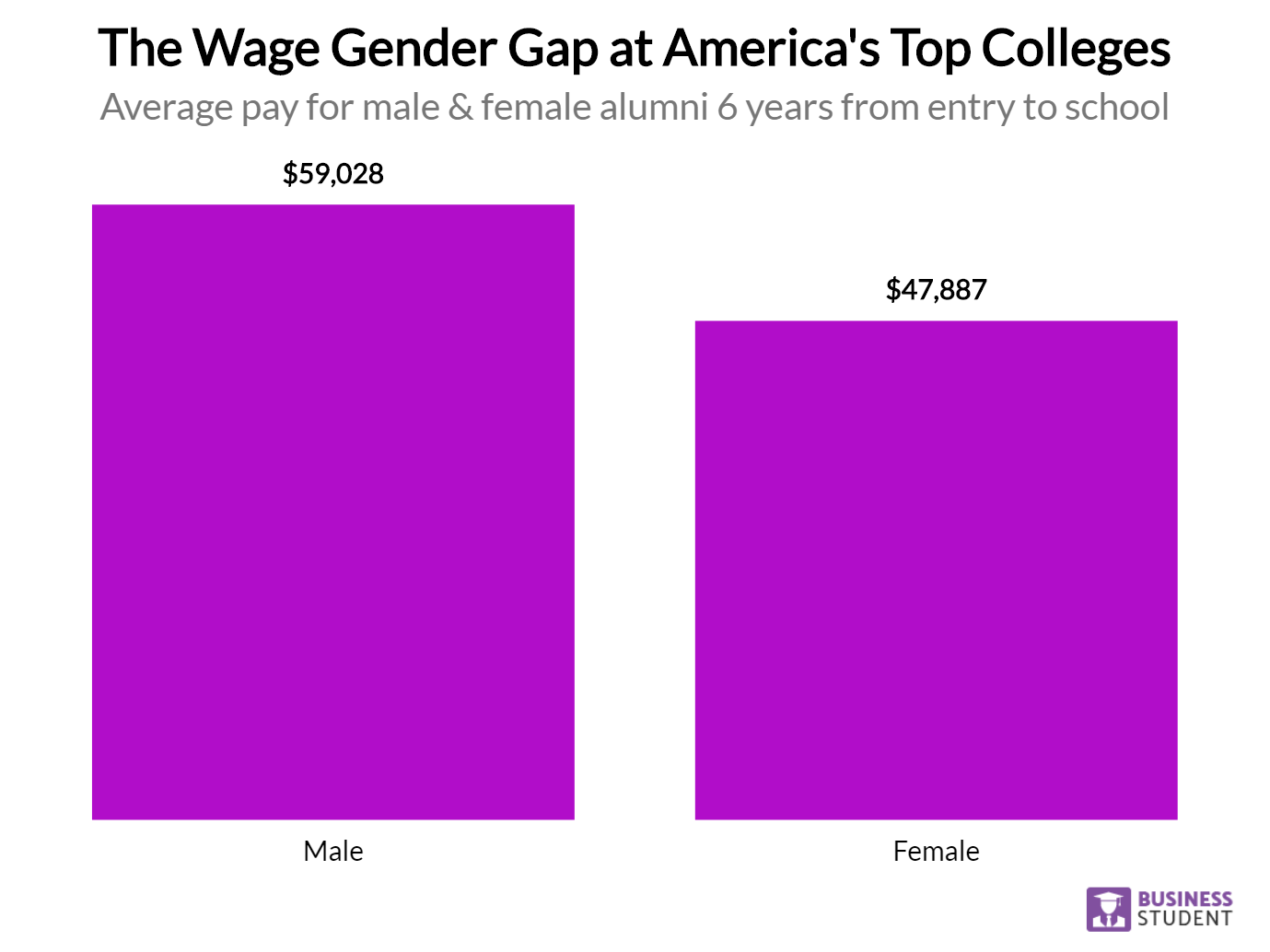 Female graduates from top US colleges earn only $48K, compared to $59K for male ones. Put differently, females start their careers earning 19% less than males, an enormous difference, especially considering how early savings compound over time. 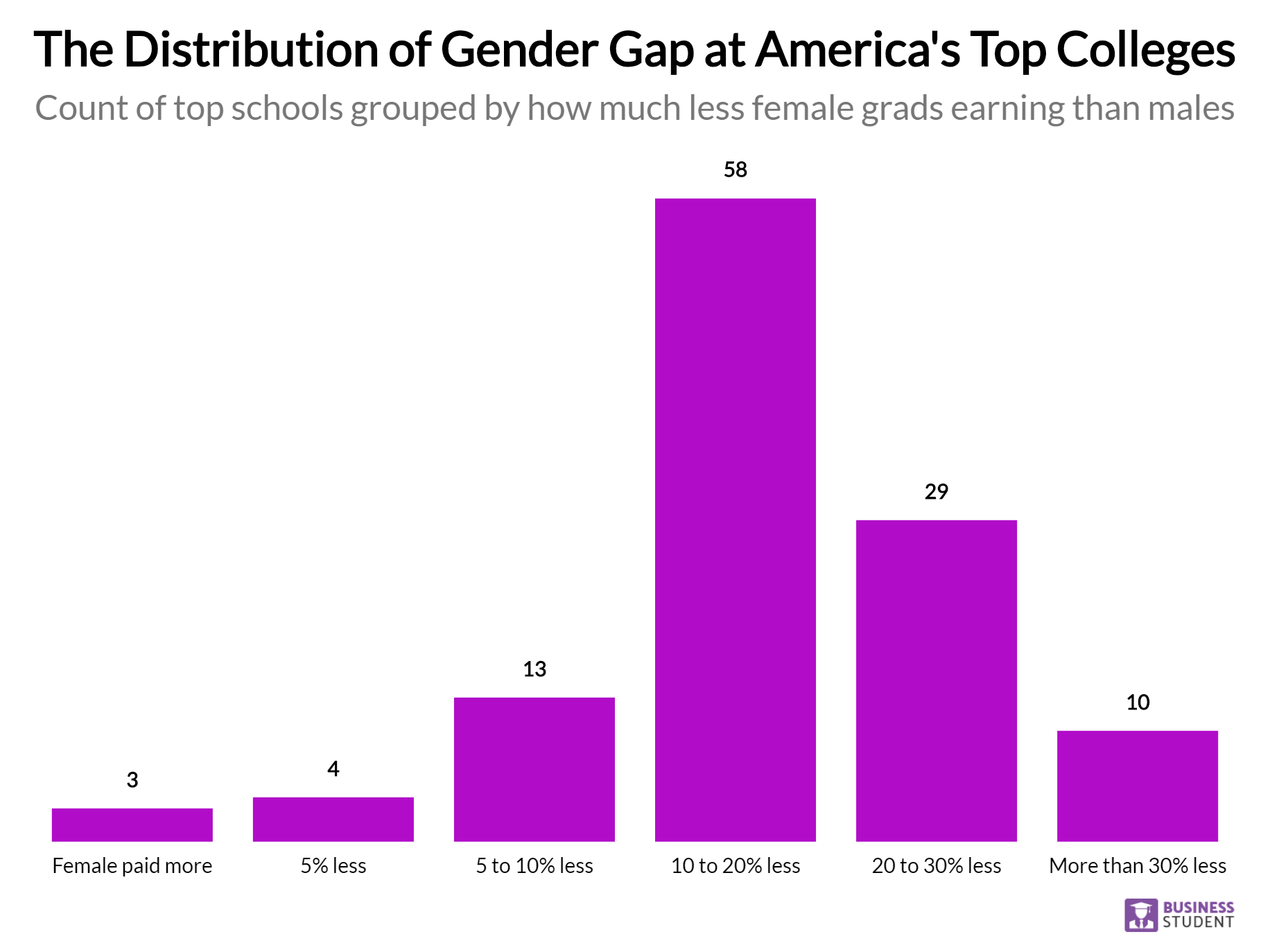 What are these schools where female alumna earn so much less than their male counterparts? Next, let’s move on to ranking the schools based on the gender wage gap. The following chart show the average male earnings, then the female earnings, ranked by how much less females earn on a percentage basis.

By a long shot, Brigham Young University ranks #1 as the school with the largest wage gender gap, where female graduates earn 57% less than male ones. Rounding out the top three are Princeton and Wake Forest where females earn in excess of 35% less than males.

This list of schools with the largest gender gap in earnings are virtually all of the most prestigious schools in America:  Harvard, Stanford, MIT, Duke, Brown, Dartmouth, Michigan all rank as places where females earn significantly less than males.

One top school that stands out for females earning more than males is Yale University. The next chart shows schools ranked with ones that have the smallest gender gap in earnings. 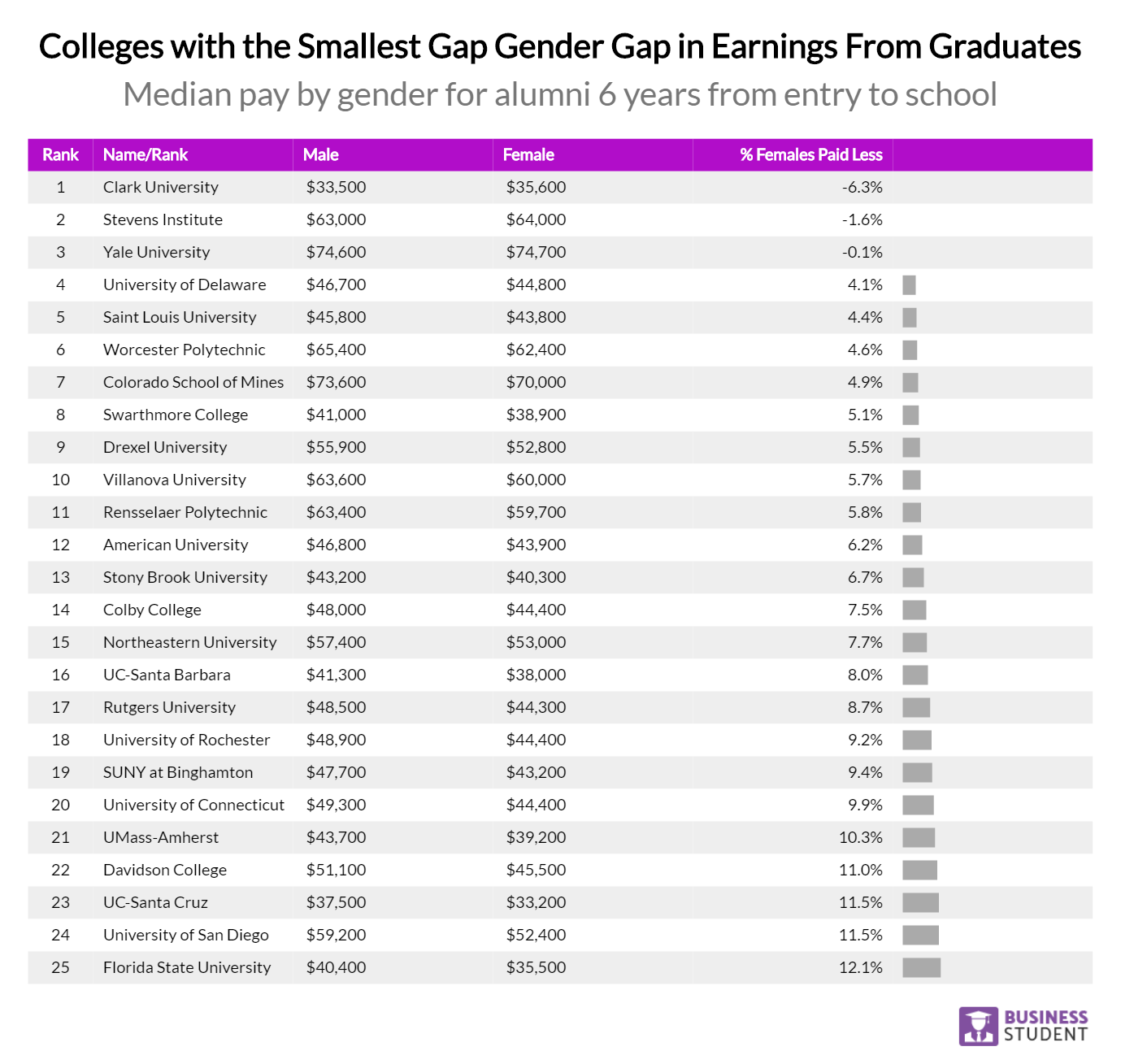 Leading the pack with the smallest gender gap is earnings amongst its graduates is Clark University, a small private university in Massachusetts where female graduates earn 6.3% more than males. In second place is Stevens Institute of Technology followed by Yale University in third.

In general, the schools on this list tend to have graduates from both genders that earn low salaries after school. Also noticeably absent from this list of schools are most of the Ivy League and other comparably prestigious universities.

Where should you go if you’re looking to make the most money? Regardless of your gender, Harvard, Stanford and MIT are the places to go to maximize your earnings.

Below are the schools where females earn the most and least. 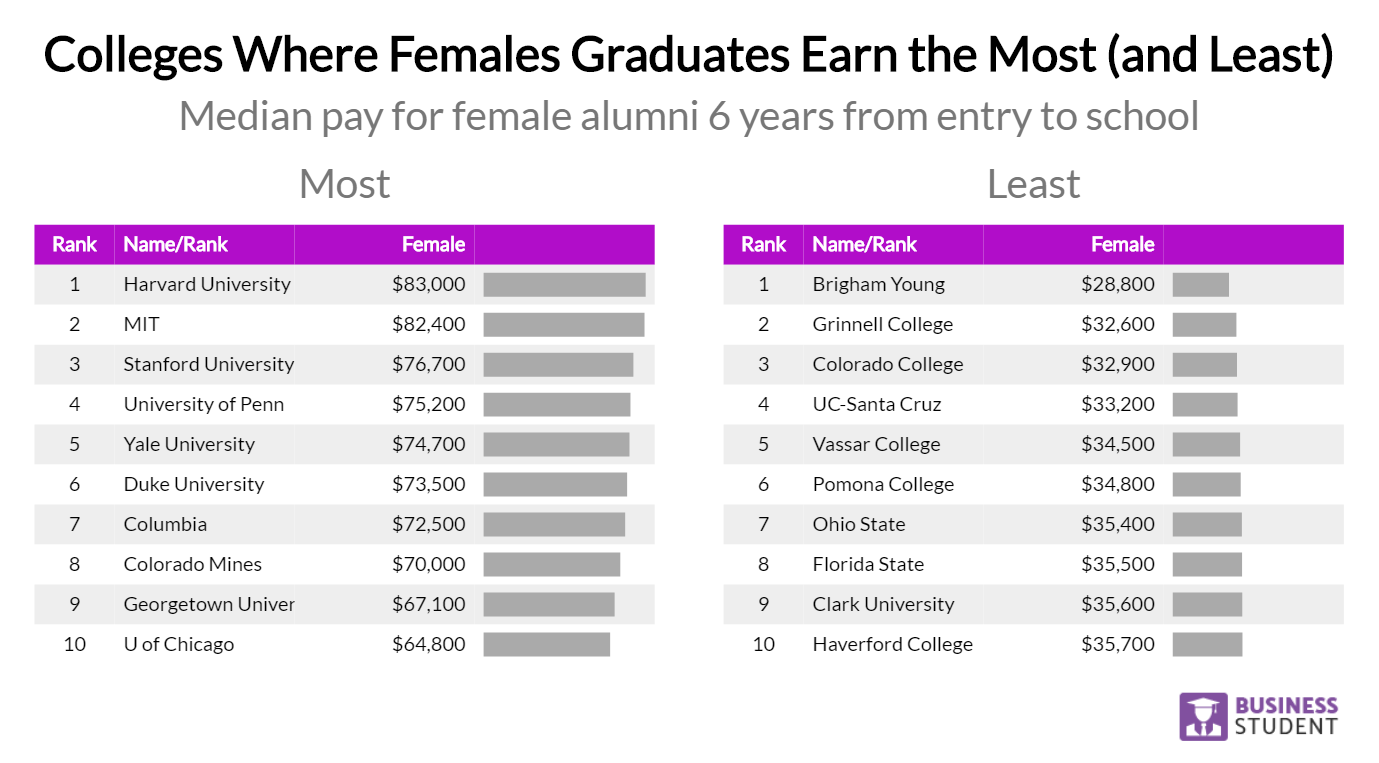 Female graduates from Harvard, MIT and Stanford earn the most, while females from Brigham Young, Grinnell and Colorado earn the least.

And where do male graduates earn the most and least? It’s a very similar list: 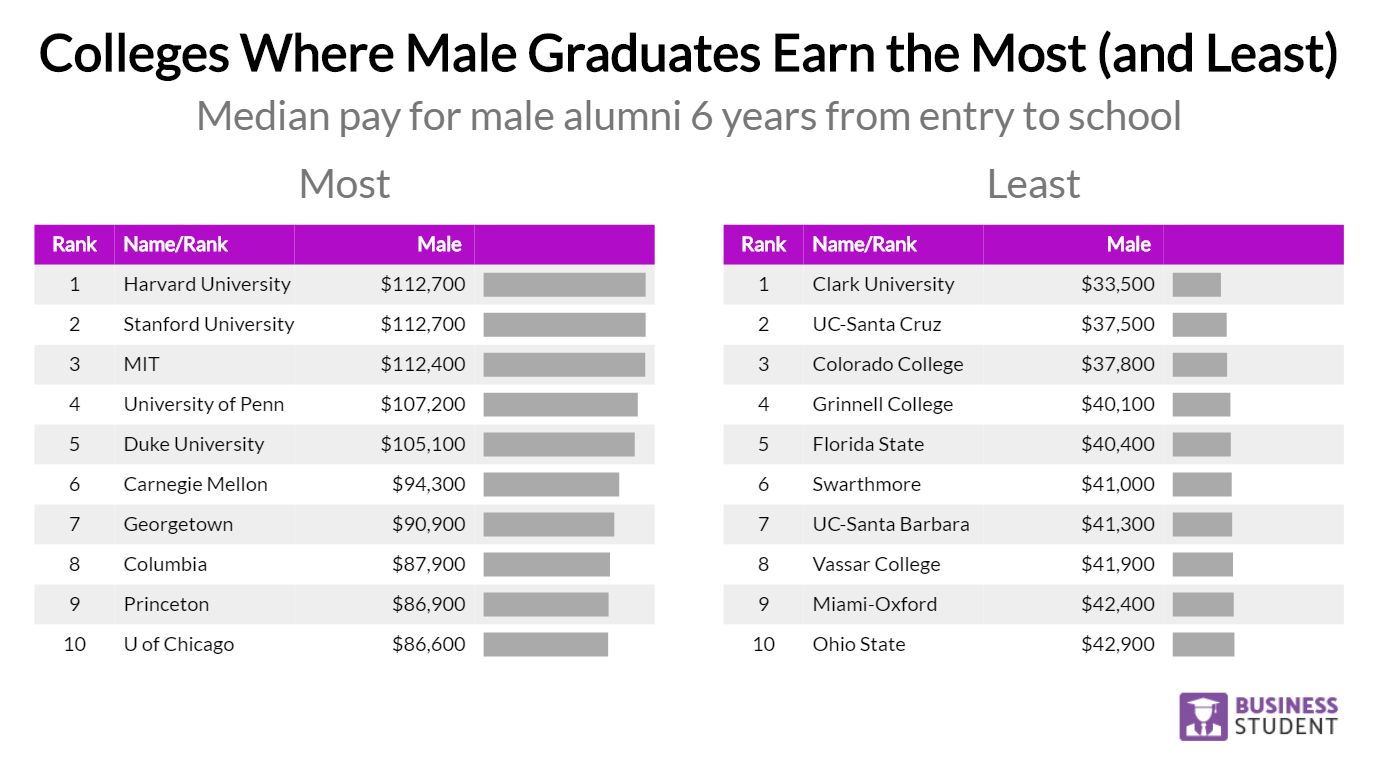 Lastly, let’s show all the data. Below are all 117 schools we looked at with the average salary for males, females, and the percentage less than females are paid. The data is sorted from schools with the largest gender gap in earnings to ones with the smallest ones.

In this analysis, using government data from the College Scorecard, we learned that at top school in America female graduates are earning 19% less than males shortly after leaving school. This gender gap in earnings tends to be most pronounced at elite universities where graduates have access to the highest paying jobs. Nevertheless, at 97.5% of the schools we looked at, female graduates earn less than male ones, a phenomenon that’s likely to have gender equality implications for the rest of their lives.

Fair Use Statement: Information is power. Please share our content for editorial or discussion purposes. All we ask is that you link back to this page and give proper credit to our author.