Every year, it seems it’s harder to get in to the top colleges in the United States. Perfect grades and SATs were barely enough a decade ago to get admission into the Ivy League and now competition is even more fierce.

But just how hard is it to get into a top college today and how does that compare to the past? If you got into a top school a decade ago, would you have a chance today? Are some schools even more difficult to get into than others?

The Senior Staff at BusinessStudent.com conducted a study to analyze admissions rates from top schools from 2006 and compare them to twelve years later in 2018. We restricted our analysis to just the top schools in the United States a decade ago (the top 51 according to US News back then) to see how their admissions rates changed.

Yes, it’s much harder to get into a top school today than it was in 2006 and admissions rates have plummeted across the board. The school that’s had the sharpest drop in acceptance rates is the University of Chicago, followed by Northwestern and Duke. Of the 51 schools we looked at, 48 schools were more difficult to get into, but two actually had higher admissions rates.

A common refrain among alumni from a top school after seeing current admissions rates is “Wow, I don’t think I could get in if I applied today.”

The data confirms that this is likely true. 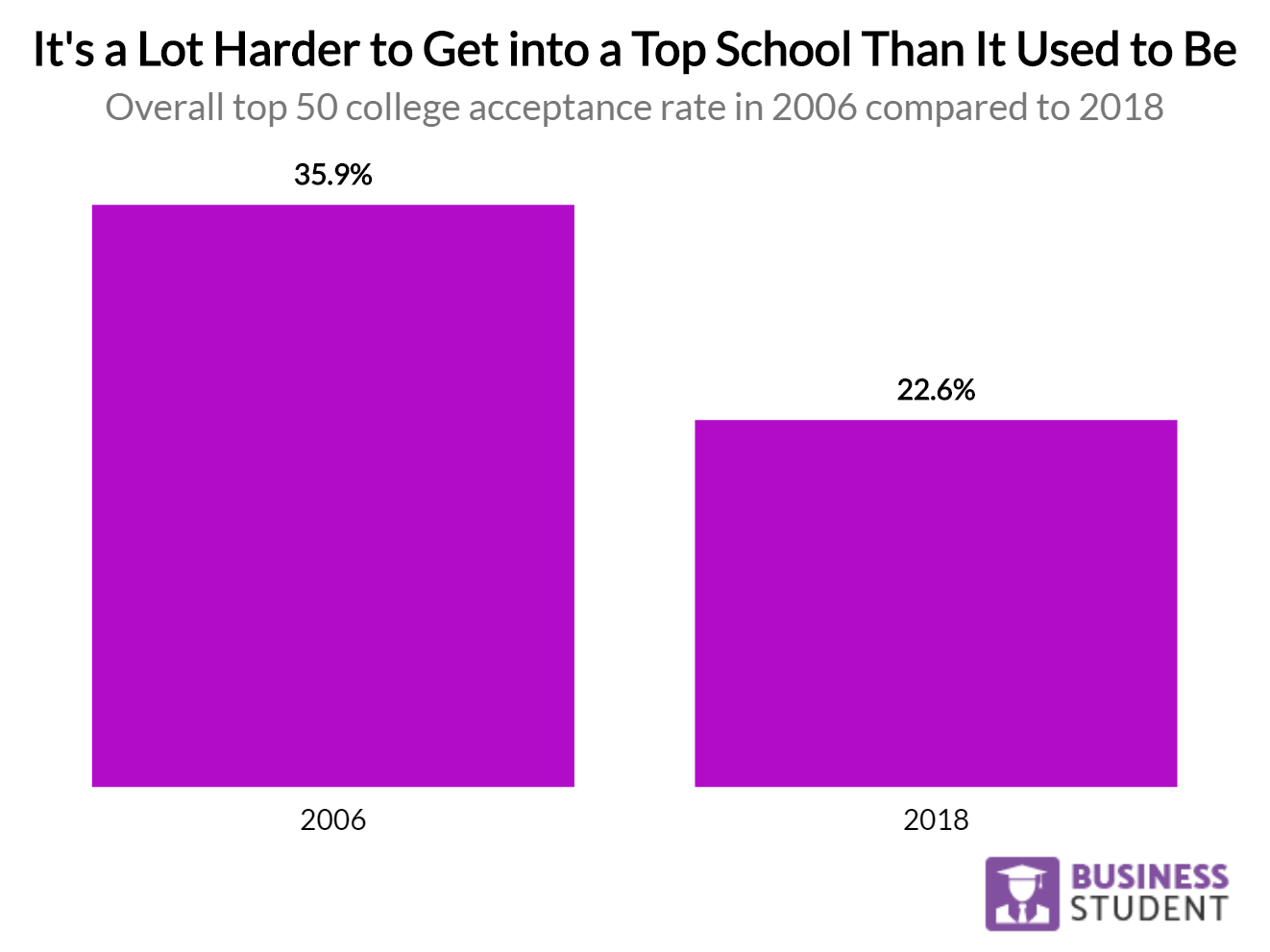 Not only that, but the more competitive the school, the harder it is to get into.

The chart below shows the schools ranking in 2006 (grouped by 10s) and their past versus current admissions rates.

A top ten school in 2006 had a 16% admissions rate. Today, that rate is just 6.4%, a decline of almost 60%. Each tranche of school is harder to get into, but “hypercompetition” is increasing the fastest at the most elite universities.

So, which schools are seeing their acceptance rates fall the most over the last twelve years? 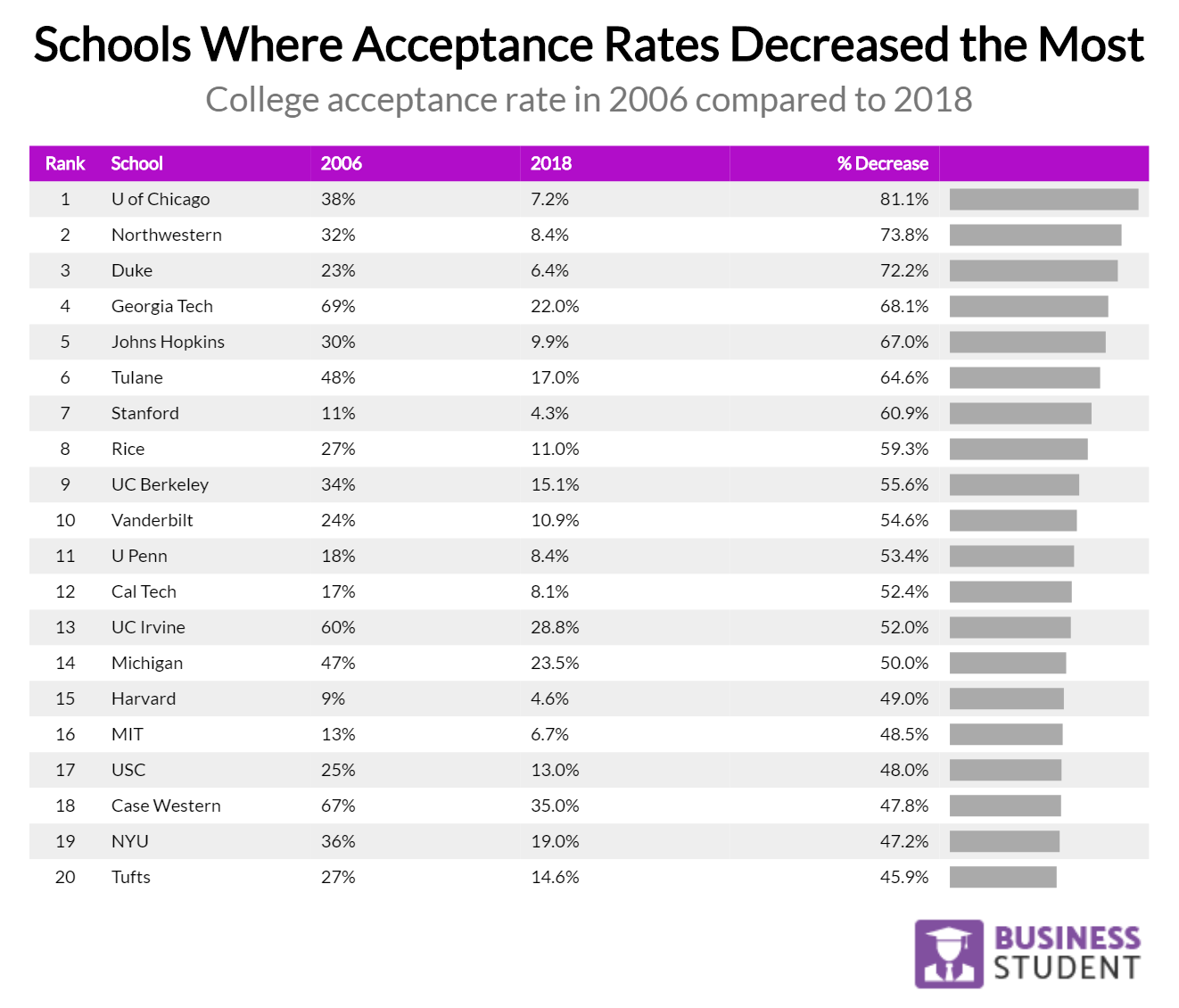 By a large margin, the University of Chicago takes the number one spot in terms of declining admissions rates. Candidates saw rates drop from 38% in 2006 to just 7.2% in 2018. Northwestern and Duke also saw their admissions rates plummet by over 70%.

Did any schools get easier to get in during this time period? Just two: 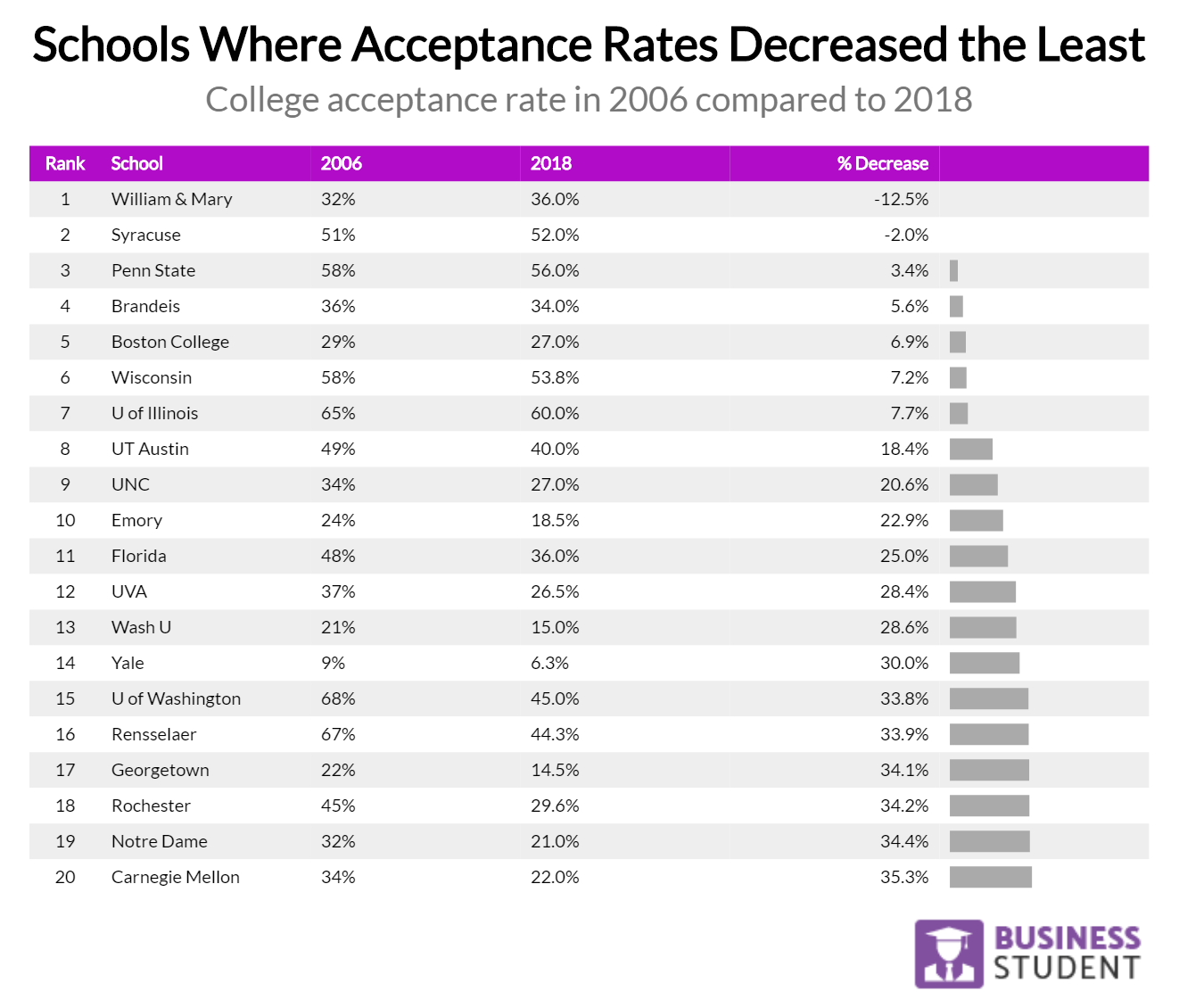 William & Mary and Syracuse saw their admissions rates actually increase slightly during the this time period. The rest of the schools that make the above list saw admissions rates drop, though not as fast as at other top schools.

Across the board, it’s become much more challenging to gain admission to a top school. What could be driving these changes?

First, there is some indication that the average applicant applies to more schools today than in the past. An article in The Atlantic relates that while a handful of school applications per student might have been the norm in the past, now 10 or 15 applications is more normal. More applications per person to the same number of slots at top schools means admissions rates go down.

Next, there is increased global demand for spots at top American schools. With the rapid development of Indian and China, there are more parents in these countries who want to send their kids to the best schools in the world, most of which are located in the United States.

Lastly, the financial returns from attending to top schools in the country continue to increase, even while college on the whole may not be as good a deal as it once was. Put differently, in a highly competitive global economy, having a degree from Harvard is extremely valuable, even if it cost you a lot money. On the other hand, a degree from an equally expense school without the prestige of Harvard may not be worth the mountain of debt. The result? More applications for schools like Harvard.

As evidenced by this analysis, in fact, the higher ranked the school, the more difficult admission is becoming. The highest tiered schools are now increasingly harder to get into, with the exclusive club of Harvard, Princeton, Yale and Stanford becoming even more exclusive. Schools like University of Chicago, Northwestern and Duke have seen their admissions rates plummet during this time period as well. Of the top schools we looked at, only William and Mary and Syracuse have gotten less competitive.

Think you could still get into a top school in 2018?

Fair Use Statement: Information is power. Please share our content for editorial or discussion purposes. All we ask is that you link back to this page and give proper credit to our author.

BusinessStudent.com is the fastest growing business education social community website dedicated to informing students and professionals on business careers, business courses, business masters degrees, and business jobs available in the competitive fields of business, technology and healthcare. Read our reviews on top online colleges for best online masters degrees, the best online MBA degrees with and without the GMAT requirement and gain exclusive insight with interviews from top business school directors, deans, faculty and more. BusinessStudent.com’s articles are regularly featured on media outlets such as CNBC, Fortune, INC, Forbes, TheStreet, Entrepreneur.com, TheLadders.com and dozens of others.