The Business of Cannabis Study

Cannabis is a tricky business.

States have been legalizing medical and recreational marijuana at a steady rate since the 1990s and Canada just became the 2nd nation (next to Uruguay) to allow legal consumption of recreational marijuana. Will the U.S. become the 3rd such potential market? Either way, growing a cannabis business is still more challenging than running your typical mom and pop shop so let’s take a look at the opportunity here at home.

This thriving market is showing some substantial economic benefits.

It’s predicted that state tax revenue from cannabis retail sales to total $745 million in 2017 and $2.3 billion in 2020. The company also estimates that if medical cannabis were available nationally, taxpayers would save $220 million in medicare expenses. (New Frontier Data)

Though profits and social acceptance are expanding across the country, federal regulations pose a few unique challenges to the emerging cannabis industry. 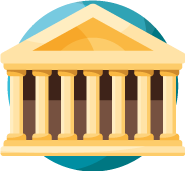 Marijuana is still illegal at the federal level, and that means no sales outside legalized states or shipments across state lines. Andthe pool of viable locations shrinks even further as some states offer better storefront opportunities than others.

Two of the best states to start a cannabis business are Colorado and California. Colorado’s licensing laws are so open that Denver boasts twice as many cannabis dispensaries as it does Starbucks. California is predicted to have recreational cannabis businesses licenses available in 2018, opening the way for a variety of dispensaries, cafes, and restaurants.

A couple of the worst states for business? New York, with its harsh regulations and highly competitive licensing, and Minnesota, which only allows eight dispensaries in the state. 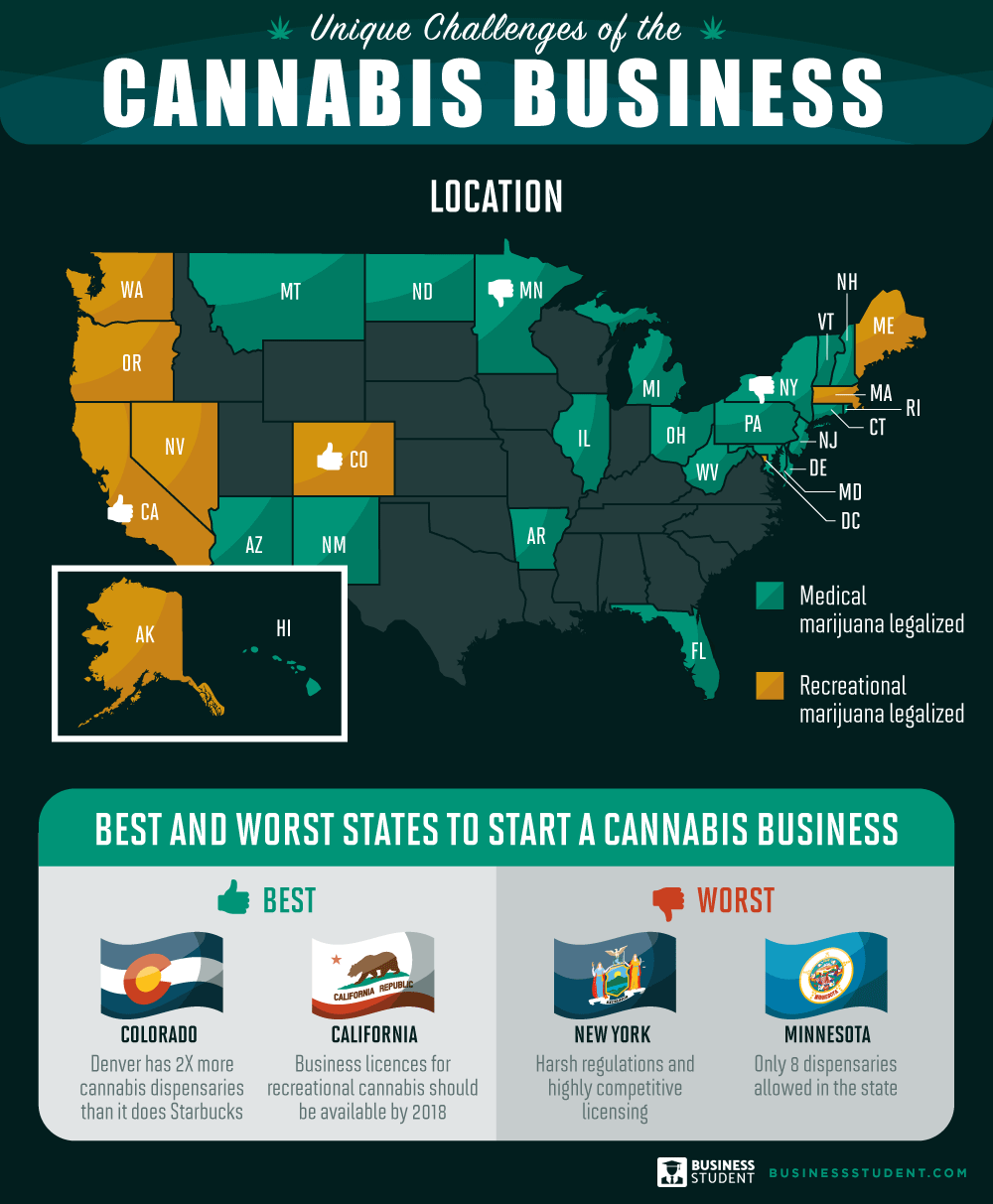 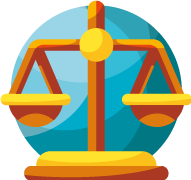 Banks and credit unions don’t quite know what to do about cannabis businesses.

The added cost of adhering to these extra rules is often transferred to the cannabis business itself—most marijuana business have to pay a financial premium just to open a bank account.

In many cases, financial institutions simply refuse to cater to marijuana businesses when the legal climate is so uncertain, forcing cannabis businesses to operate entirely through cash.

Even this much progress in the financial system could slow or halt, however, with new challenges to the lenient enforcement practices that were the norm during President Obama’s administration. 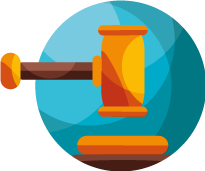 On January 4, 2018, Attorney General Jeff Sessions rescinded Obama-era memos that assured cannabis businesses they would not be subject to federal prosecution as long as they followed their state’s laws. This move caused panic and uncertainty throughout the cannabis industry.

However, don’t think Sessions’ move means Justice Department agents are going to come kicking down your doors. There are plenty of reasons this latest legal threat is unlikely to end the marijuana industry.

Since 2014, Congress has included a policy in the spending bill to prevent the Justice Department from prosecuting users in states where medical marijuana has been legalized.

Recreational cannabis might not be dramatically affected, either. By rescinding the memos, Sessions is merely giving federal attorneys the option to prosecute in their states; no law is requiring prosecution. And according to the Washington Post, several of the 13 U.S. attorneys in the the eight states where recreational pot is legal have said they will only prosecute if a cannabis business has ties to crime or violence.

The change was also met with bipartisan condemnation from Congress, with both Democrats and Republicans claiming Sessions’ decision goes against states’ rights. 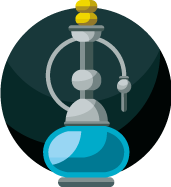 Despite these unique challenges to the industry, careers in cannabis look promising. 97% of recreational cannabis stores and 94% of medical cannabis stores make a profit or break even. The cannabis market is set to create almost 300,000 jobs by 2020—more than the projected job growth for Transportation and Warehousing, Mining, and Manufacturing.

Women in particular are benefiting from the booming cannabis business. The portion of women executives in the cannabis industry is 27%; that’s 4% higher than the national average of 23%.

In a survey of cannabis business employees, 30% said the company they worked for was owned entirely by women, while 57% said their company was at least half owned by women.

Before you get in on the action, it’s important to do your research and know what kinds of jobs are available in the industry. On the retail side of the business, there’s need for store managers, cannabis sales reps, and dispensary owners. Other important jobs allow you to get your hands dirty, such as grow masters, extraction technicians, and bud trimmers. With an increasing amount of cannabis restaurants and cafes, edibles chefs are also in high demand. There are also a number of Cannabis degrees, courses and certifications you can take to up your skills. Note: We highly recommend a degree in business administration or if you’re short on time, you might consider choosing an accredited Online MBA degree to truly stand out among other job candidates. Another popular option includes free business courses online to polish up on your skills or simply a self paced online college course.

For those interested in getting involved with the cannabis industry, job boards such as Ganjapreneur.com, Cannabisjobsboard.com, and 420careers.com can be great resources.

Cannabis can be a tricky business—but it’s also full of opportunity. Some of the top jobs that you can look for in the marijuana industry today include:

We interviewed some key Cannabis experts and got their opinions about the state of the business.

“For years, Cannabis was taboo, being discussed only in private groups among trusted peers. Today, Cannabis has stepped out of the shadows and into the light. Discussions have moved from privacy to political debate, and more importantly to the family dinner table. Cannabis culture is not undergoing a revolution; it’s a peaceful evolution.” – Bob Ronalter, CEO Classy Joints Classyjoints.co

“2018 will likely see more U.S. states pass medical and recreational cannabis law, as the taboo surrounding cannabis culture diminishes and we enter into the beginning of the end of marijuana prohibition. In terms of price, that means more competition among dispensaries and, in general, falling costs on cannabis and cannabis-related products.”– Mitch Strohm, Co-founder, MarijuanaRates.com

“Not being able to advertise cannabis related products on major networks such as google, Facebook and Instagram can make it really hard for a cannabis brand/company to grow. This is where influencer marketing comes in. As these platforms don’t allow paid advertising you can always pay an influencer or work a deal with them to do a post on their pages on platforms such as Facebook and Instagram.”  – Moe Meyers Instagram- @Cannabis

“The perception of cannabis patients is changing each day, as more of the community come out without fear of arrest to talk openly of their use. The stereotype of the “stoner” is just that nothing more than a stereotype that was used when we are made to fear a group of fellow humans for a agenda that marginalized and jailed minorities. I am hopeful for the future and for the mainstream to see us as who we are, we are your mother, father, brother, sister, friend, seniors, veterans, we are right next to you.” – Ophelia Chong, StockPotImages.com

“Like any future, the future of cannabis is tough to predict. The likelihood is that scientific research will reveal definitive therapeutic benefits to cannabis use with limited long-term consequences; cannabis will be labeled a health & wellness product when used in moderation and embraced in everyday life. Cannabis will go mainstream.” – Alex Milligan – co-founder & CMO of Nugg/NuggMD

“Just like the prohibition of alcohol in the 1920s, which came to an end in 1933 via Congress, we’re witnessing the same with cannabis. Given time, ordering some cannabis will be the equivalent of ordering a glass of red wine.” – Skylar Jessen, Chief Operating Officer, Sky Cannabis

“You can see how different state and national governments treat the devil weed as Reefer Madness. Right now, US cannabis businesses, some of them raking in millions of dollars a month, cannot use banking or credit card services to collect their money, hold their money or pay their bills.” – MaryJane Farmer, 420beginner.com

“We see a definitive trend away from cannabis for intoxication alone, and towards cannabis use for everyday lifestyle and wellness purposes. In a recently commissioned study of 100 self-identified cannabis users (by tractionrabbit.com) 80% of those aged 35+ said they use cannabis daily for wellness purposes such as sleep, anxiety and/or pain management, and not for intoxication.As the novelty of legal cannabis continues to fade, it will be rapidly replaced with a customer focus on ailment specific products that target the wellness and lifestyle needs of patients and consumers.  Premium brands with consistently dosed products, backed by science-based evidence showcasing how individual cannabinoids interact with your body to achieve the desired result, is the future of this industry.” – Josh Richman, SVP, Sales & Marketing, Franklin BioScience – The Makers of Altus Labs products

Help spread the words in support of the future of Cannabis.